Read e-book Yemen: Dancing on the Heads of Snakes

To give you a better overall experience, we want to provide relevant ads that are more useful to you.


For example, when you search for a film, we use your search information and location to show the most relevant cinemas near you. We also use this information to show you ads for similar films you may like in the future. Like Verizon Media, our partners may also show you ads that they think match your interests.

Learn more about how Verizon Media collects and uses data and how our partners collect and use data. Select 'OK' to allow Verizon Media and our partners to use your data, or 'Manage options' to review our partners and your choices. Tip: Sign In to save these choices and avoid repeating this across devices. You can always update your preferences in the Privacy Centre.

Podcasting about books since 2007

But it is the characters she meets, and in some cases the bureaucratic obstacles she has to overcome to visit them, that bring the book to life. Clark — a journalist who was born in Yemen during the colonial era — captures the essence of the country in a way that more academic writers rarely do. She drinks tea with Nasir al-Bahri, formerly Bin Laden's chief bodyguard and a bizarrely contradictory figure.

After a spell in jail, he has done a bit of taxi-driving, had three amicable meetings with the president and has taken courses in marketing, sales and neuro-linguistic programming. At root, Yemen is still a deeply tribal society. 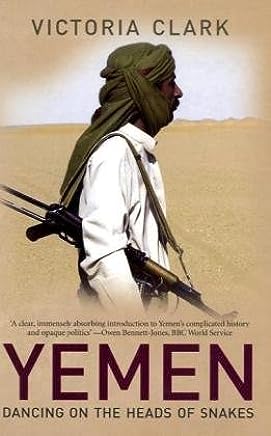 When the state fails to deliver, people turn to the tribes. In fact, many would say that working through the tribes is really the only way to get things done, though in the long run that merely reinforces the grip of tribes over the state. Tribal values are not devoid of noble qualities but they are also a reservoir of backwardness.

This, in essence, is Yemen's dilemma: to function it needs tribes but to progress it needs to get rid of tribalism.

Yemen Dancing On The Heads Of Snakes

Clark notes that the Arabic word for "government" is not really about exercising power; it has connotations of wisdom, arbitration and justice. This seems particularly apt in Yemen, where those in charge — from small-time sheikhs up to presidents — tend to be viewed as referees rather than leaders. Indeed, Salih, in the manner of a village sheikh, seems to spend a large amount of time arbitrating in quarrels when, in his presidential role, he ought to be focusing on the country's development and long-term problems such as the dwindling water resources and a rapidly growing population.

Short-term fire-fighting, though, is where Salih appears most comfortable and perhaps most effective.

Yemen Politics: "Like Dancing on the Heads of Snakes" - video dailymotion

Visionary leadership is not his forte. Clark does not offer much to be optimistic about, but she makes a very persuasive case against simplistic solutions.

For the armchair commentators at Fox News and similar organisations, this book ought to be required reading. It is easily the best and most readable account of Yemen's current problems and their daunting complexity. Clark brings the story right up to date with discussion of the Houthi rebellion in the north currently suspended if not permanently resolved , the separatist insurrection in the south and, of course, the concerns about al-Qaida.

Salih's gut instinct is to treat all these elements as if they were simply wayward tribes. If only they were. Clark wonders how much longer Yemen's president can keep up his dance before the snakes finally get the better of him.